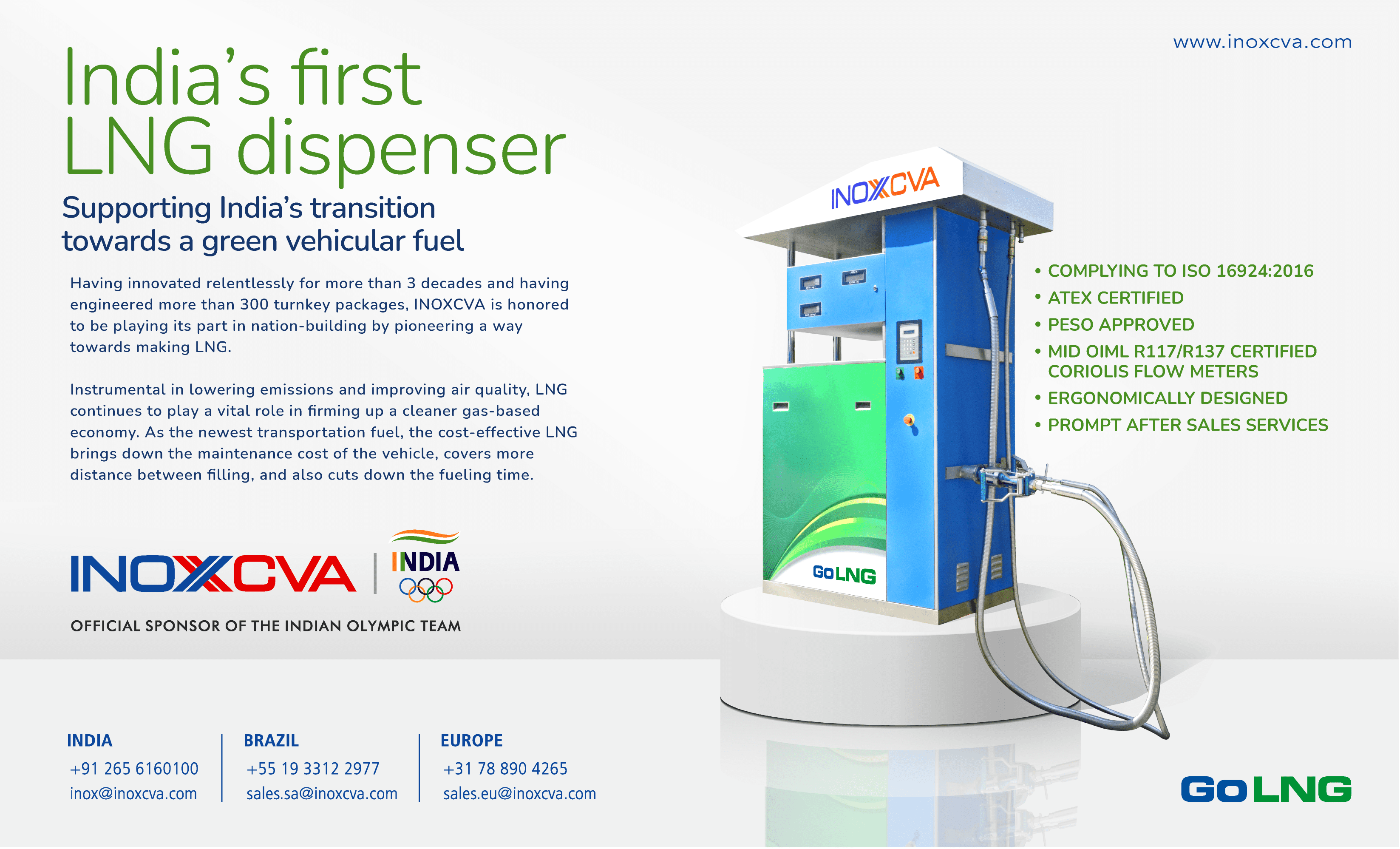 Mumbai, 4th March, 2021.Indian multinational and one of the world’s leading manufacturer of cryogenic technology equipment and solutions, INOXCVA has announced that it has indigenously designed, developed and manufactured India’s first ever LNG Dispenser. With LNG being introduced as a vehicular fuel as per the Central Motor Vehicle Rules, the creation of this LNG Dispenserby INOXCVA would play a significant role in promoting the use of the sustainable and environment-friendly LNG for long distance heavy motor transportation.

The development of the LNG Dispenser is in line with the Government of India’s encouraging and progressive policy to promote LNG as fuel for heavy motor vehicles in India. With LNG poised to become an alternate to Diesel for long distance trucking and passenger transportation, INOXCVA has developed an end-to-end integrated solution for Indian markets, with locally certified Fuel Tanks, Fuel Stations and LNG dispensers. This endeavor strongly supports Government of India’s vision of increasing the use of natural gas in the country’s energy mix by enabling the use of safe and environment friendly fuel in different sectors of the economy.

With Government’s plan of setting up more than 1000 LNG fueling stations across the country, LNG as a transport fuel,would not only reduce the air and noise pollution levels, but also have a greater commercial advantage in comparison to the prices of Diesel& Petrol. To enhance the availability, INOXCVA has developed on board LNG Fuel tanks for heavy duty buses and trucks. Being a liquid fuel like Diesel at low pressure and having higher density per volume, LNG as a fuel allows large commercial vehicles to cover more distance between two fillings as compared to CNG and cuts down the fuelling time. The initiative would also significantly bring down the vehicle maintenance cost as compared to diesel vehicles.

Commenting on the latest development, Deepak Acharya, Chief Executive Officer – INOXCVA said, “With LNG destined to play a major role in the country’s transition into a Gas-based economy, we are glad to have developed an innovative& world class solution, which would not only enhance its availability, but would also increase its usage as an alternative fuel. Looking at the massive strides made by the country on the economic front, we are proud to support the transition to a greener, cleaner and environment-friendly fuel. We are proud that our Dispensers would lend more sustainability to the Make In India and AatmaNirbhar Bharat missions.”

The LNG Dispenser developed by INOXCVA complies with ISO 16924:2016 norms and is also approved by PESO India. The Dispenser also bears the important ATEX Certification, a European certification given to equipment tested and approved to be intrinsically-safe.INOXCVA supplied such LNG Dispensers to Petronet LNG-Dahej and Petronet LNG-Kochi terminal for trial purposes. The trials have been successfully completed and Dispensers developed have been found to be extremely efficient and highly effective.

INOXCVA has also developed equipment for mobile LNG fueling station to cater the requirements for mining industry and remote areas supporting Government’s initiative of building a Green ecosystem and the vision of AatmaNirbhar Bharat.

INOX India Pvt Ltd (INOXCVA)is one of the largest manufacturers ofCryogenic Storage, Re-gas and Distribution Systems for LNG, Industrial Gases and Cryo-Scientific applications with operations in India, Brazil & Europe. The Company has an extensive user base, spread across more than 100 countries and is serviced by a network of after-sales support associates in 25 countries. The Company’s key strength lies in design engineering, manufacturing, supply and commissioning of Cryogenic turnkey packaged systems with reputation and a vision to deliver a significantly higher value to its consumers. For more information, please visit www.inoxcva.com